The entrance exams they fought with each other. They were classmates in first grade. Assault’s classes were attended together. Even for Commissioned Quests they were on the same team together!

“I didn’t expect that even the second-grade classes we’re still in the same class.” Fang Li said with a sigh, “Could it be that some kind of curse?”

“Then the cursed one must be me.” Tohyama Kinji smacked his head saying, “Even if you’re cursed, you have Hotogi-san to remove the curse, it’s nice having a Miko around…”

“And you have the nerve to say it.” Fang Li questioned, “Haven’t you the son of the Tohyama Family and Hotogi Shrine been in contact since time immemorial? But how come I’ve never seen you take care of Shirayuki?”

“I don’t need that kind of trouble.” Tohyama Kinji said with a defiant face, “It’s not like you don’t know about my physique, a girl like Hotogi-san, if I go anywhere near her, I’m going to be absolutely miserable.”

In other words, Tohyama Kinji’s just disguising his admission that Shirayuki is attractive. But that’s not surprising. In Butei High, Shirayuki is known as a top student. Gentle and kind. Extremely polite. Abnormally beautiful. High achievements. Even in Supernatural Selective Research, Shirayuki is a first-class student

This Yamato Nadeshiko was the dream girl of many boys in the school.

This year, Shirayuki is the President of Butei High Student Council, and while also being the head of the Horticulture, Handicrafts, and Girls Volleyball Clubs.

Of course, Shirayuki is not without flaws. For example, Shirayuki sometimes fell into her own crazy delusions then does a series of creepy things.

For example, last year, Fang Li went away for a Quest, and although he took a leave from school, he didn’t inform Shirayuki. As a result, that day, Fang Li received nearly a hundred SMSs, all of which were sent by Shirayuki to ask about his whereabouts, and when he returned, Fang Li found that Shirayuki had commissioned Informa and Lezzad’s people to look for him!

You can imagine how Fang Li felt when he helped Shirayuki receive a package and opened it out of curiosity to suddenly see these things.

Since this memory was so dark, Fang Li didn’t hesitate to seal it and vowed that he would never forget to report back to Shirayuki when he came out to Quest.

If Tohyama Kinji was understood, he’d be scared to death too, right?

At that moment, Fang Li shook his head and put all this behind him, and shortly afterward took a seat not far in front of Tohyama Kinji.

Without turning back, Fang Li opened his backpack and said abruptly, “You’re really not going back to Assault?”

The air around them turned heavier at once.

“…not going back.” Tohyama Kinji flipped his head back and whispered, “Besides, after this year, I’m going to transfer to a regular high school and definitely not be a Butei.”

In fact, Fang Li sighed darkly in his heart, what a pity. In Assault, the only person who can fight Fang Li is Tohyama Kinji, more precisely, Tohyama Kinji in Hysteria Mode.

However, just six months ago, Tohyama Kinji suddenly switched subjects, transferring from Assault to Inquesta, then declared to him, that after this year, he’d be transferred out of Butei High and will be going to a regular high school, no longer trying to become a Butei.

In that incident, Tohyama Kinji’s Big Brother had every chance to escape, but lost the chance because he wanted to save the rest of the people. Under such circumstances, his Big Brother who saved so many people not only did not get the glory he deserved but was instead criticized for being worthless. The blow Tohyama Kinji suffered could only be imagined.

All of this is due to the bad image Butei had in this world. Even if the Butei did the right thing, the end result wasn’t necessarily good.

Tohyama Kinji then resolutely quit Assault, transferring to Inquesta instead and getting ready to transfer schools next year, no longer wanting to become a Butei.

“Everyone has their own aspirations, I won’t say much about what you think.” Fang Li said as if talking to himself, “Only, after you leave, I will have one less opponent who can fight me for real.”

His words had just been spoken when a voice suddenly jumped out and reached Fang Li’s ears.

With the sound of such a sentence, a petite figure popped out from the side of Fang Li’s desk. Fang Li and Tohyama Kinji were stunned.

The newcomer folded her hands into rabbit ears on her head, saying in a cute voice, “Don’t worry, Riko’s a herbivore today, so she won’t suddenly yell at you!”

The girl who speaking was a very cute girl. She had fluffy and soft golden hair, with a pink ribbon tied to the sides of the head, giving her a twin tail look on the sides while having straight long hair cascading down her back.

She was naturally wearing Butei High’s girl’s uniform, but it had been transformed by her to add lace and pleats, so she looked kind of like a loli. Although she’s a bit small, she’s got a great body, especially her chest which was so full that it’s almost catching up to Shirayuki….

This cute girl with a pair of glittering eyes, looked at Fang Li, the smile on her face was so sweet it could drip out honey. 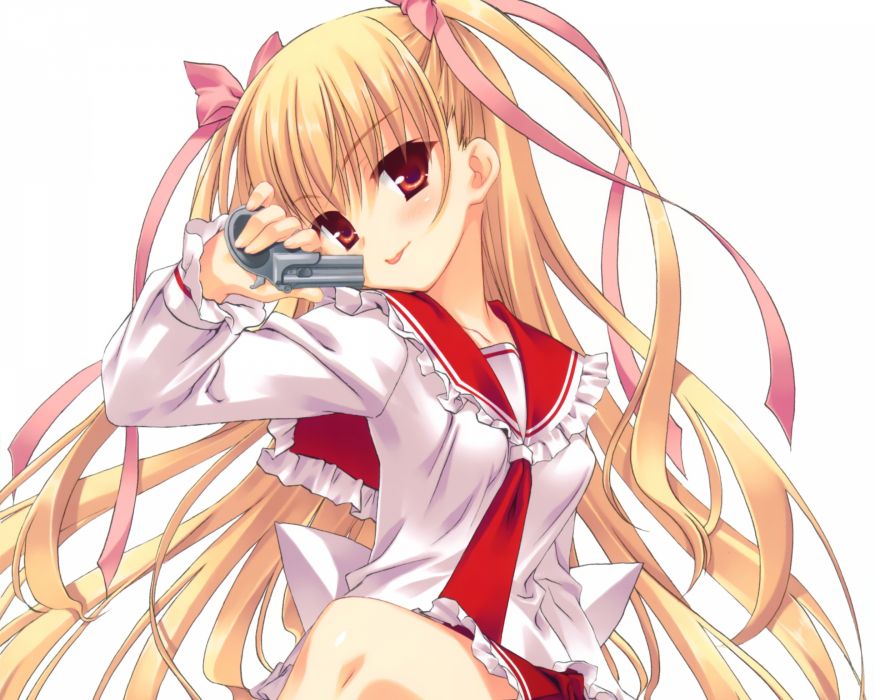 I’m satisfied with Shirayuki alone, hopefully Aria and others don’t come to like the mc and stay with Kinji.