That’s the first time Dongfang Minghui had ever seen the lightning rat get angry, it was completely different from the previous cute animal. It squeaked and growled with unusual anger, right now it was like a ninja, you never knew when it would appear, let alone from which direction it would attack, it was quick as a bolt of lightning and would flash to your face. The next instant blood would splash and your throat would be cut off.

Not only that but just now it also screeched out a signal, soon, many more lightning rats appeared in the forest.

Dongfang Minghui smacked her lips, seeing that the other party was too busy dealing with the new threat to deal with them, it gave her some free time to wipe off her sweat.

“Now they don’t have time to chase us.”

Little Color was surprised, “Why did the lightning rats summon their kind?”

The Blood Fiend Alliance was originally from an assassination background, and now that they had met the Lightning Rats, who were famous for their sneak attacks, it was like a king against a king, they were equal opponents.

The lightning rats used the favorable terrain and the familiar trees for cover, they fared slightly better in this area of the battle.

The claws of the Lightning Rat were a powerful attacking weapon, wherever it scratched, the toxicity of the poisonous flower would soon penetrate into a person’s internal organs, causing them to bleed to death from their seven apertures.

In a few moments, many people from the Blood Fiend Alliance were successively struck, falling to the ground unconscious and dying horribly.

“Young Master, the other party has somehow summoned a group of Poisonous Demonic Beasts, and these Demonic Beasts are extremely toxic!” The eldest elder almost suffered a calamity as well.

“Retreat.” Wei Junlan saw that the situation in front of him was not right and immediately gave a new order.

The forest was in flames and all the other creatures were running far away from the land.

But Wei Junlan was a little late in giving the order, for as soon as he finished speaking, the entire ground began to shake and shake, the lightning rats froze one by one, gazing with round eyes in the same direction, their soft hairs were like hedgehog spikes all standing up.

This was a situation that happened when they were facing an extremely strong enemy.

Not even needing to be reminded by Dongfang Minghui, Little Color tied her with a vine and drew away, as fast as lightning, faster than the lightning rats with more than enough to spare, “Oh shit this is going to kill me, it’s really coming!”

Soon, the lightning rats also scurried off one by one, holding their heads and fleeing for their lives towards the other side.

A large group of beasts also scattered as if they had encountered some even more terrifying existence and had gone crazy.

Such an abnormal picture naturally attracted the attention of Wei Junlan’s group, who looked in the direction the animals were fleeing. After looking around the scene again, he immediately said, “Retreat.”

He actually fell for it again.

Two losses in a row to the same person in one day, this was kind of the first time he’d ever been so aggrieved…

He wasn’t a gentleman so naturally, he’d take revenge for this.

Dongfang Minghui who was fleeing for her life couldn’t help but sneeze loudly, “Oops, let’s take Seventh sister almost forgot about her.”

Little Color ran out a long way, it felt as if it was almost at the border between the Mountain Range and the Venusian Continent, a little more running and it would be out of the forest.

“For a Purple Cloud Fruit, you almost lost your life.”

Dongfang Minghui glared at it, angrily pulling its vines over and tying a knot, one wasn’t enough so it tied another one, “Say who was the one that ate the other fruit?”

She’s the one who’s really running around in misery, okay?

Little Color had gotten the Purple Cloud Fruit at least, and the Female Protagonist was sure to find the cub, but for her, not even a blade of grass! She hadn’t gotten a damn thing!

These people were all simply getting a bargain deal hmph.

Dongfang Minghui decided that she would not speak to Little Color again until her anger was gone.

Little Color was good at reading people’s faces, and when it saw her angry face, it immediately changed its appearance to please her.

“Don’t be angry, didn’t I give you a suitable cultivation method for your physique?” A childish voice sounded in her ears.

Dongfang Minghui wondered if she was confused by anger and dreaming.

The voice was sticky and soft.

When she turned around, she saw a fat baby sitting next to her and giving her the attitude of you don’t take care of me then I’m not taking care of you.

Little Color thought that this human was too annoying, and its angry face stared at her hard.

“If you pinch me again, I’ll definitely give you a good look.” Obviously it was a threat, but coming from a fat baby, there was no strength at all.

“Geez, let me play a little longer.” Dongfang Minghui loved children, especially cute babies that were so white and chubby those were simply her favorite. She loved it!

Little Color couldn’t endure it for a while and looked extremely serious and said to her, “If you come closer, I’ll use you as a cauldron.”

“Hahahahahaha, how ruthless and cute you are.” It was as if she had gone back to a time when she was a kid drinking milk and flashing a look like she’d eat people to the adults if they looked again.

It was simply akin to what Little Color said.

She looked back and saw that it was none other than Mu Qing, who had been planned by the Female Protagonist earlier, as well as the little junior brother holding onto an injured junior sister, who appeared in front of her.

Seeing him bringing his junior brother and junior sister over, Dongfang Minghui concluded that he hadn’t been seriously injured in the previous fight.

The three of them appeared at the same time, did that mean that they had taken care of those seven people from before?

Dongfang Minghui’s hands trembled as she hugged Little Color what should she do next?

Shoutout to the recent donators on Ko-fi, I’m so happy all of you love the novel! I’ll try release a chapter part every day next week. Stay safe and happy reading guys~! 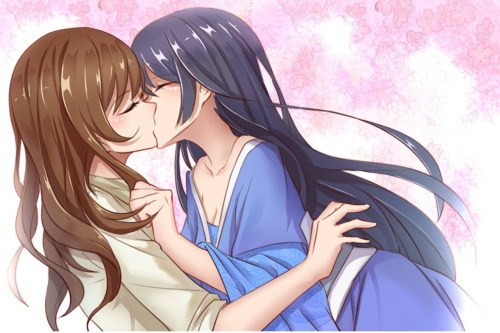 Thanks for the chapter. What anime are in the picture?

This is from a cancelled Chinese yuri VN – Xun Nuo

Another cutie appeared! Damn I caught up with the updates. I’ll have to stack them up again.

Thank you for the chapter!