In his fuzzy conciousness there seemed to be some person calling him.

The sound got more and more clear until he could identify the master of the voice.

The voice sounded delightful, light and lovely. Therefore, the Master is definitely a young girl.

Feeling the soft sound calling out his body swayed. He wanted to know who was calling him.

However, more so he wanted to say.

The soft sound was like a lullaby that was coaxing him to sleep, with his conciousness slowly becoming less sober and going back into he dreamworld.

Convincing himself with such an excuse, the person began to sink back to the land of dreams.

But suddenly the sound that was still coaxing him suddenly stopped.

His heart started to be a bit discontented.

This was an instinctual thing. So long as the sound kept coaxing for even a second more he would be able to go back into a deep sleep.

When he heard this sound suddenly there was a *Pa* sound as something hit hit face making him feel pain and waking him up from the deep sleep.

TL: This means it hurts in japanese, I figured it fits better because it’s a japanese world. In the actual raws it means the same.

Along with the pain, the last of his sleepiness went away completely.

Its body was snow white with not a speck of dust on it, looking like a small fox or a puppy and not allowing people to tell exactly what species it was. A very strange living thing.

This strange thing opened its pair of round eyes and also stared at the youngster with a posture that it had just completed it’s job of hitting and leapt to stand behind a graceful figure.

It was a young girl.

Her age was the same as the youngster, she had shoulder length pink hair and bangs covering an eye, wearing a pair of glasses and looking quite cute. Her face seemed very fine as if it had been carved by an artist and all in all it was a young girl that made a person’s heart beat faster.

At this moment, the young girl extended her hand and grabbed the approaching living thing.

“Thanks for the trouble Fou.”

The young girl was obviously thanking a friend who had helped her do something.

But the person who let Fou do that can only be…

The youth covered his face and looked hatefully at the girl while calling her name.

It’s a pity that the girl ignored him and earnestly responded, “Good morning Rozen senpai!”

The name the young girl named Mashu called out was the youngster’s name.

This wasn’t the youngster’s real name but for certain reasons familiar people would call him Rozen as a nickname.

This Mashu girl was obviously familiar with the current Rozen.

Holding up Fou, Mashu looked at Rozen’s hate filled face as if wanting to blame her.

“You were up all night playing games again senpai?”

Carefully looking at Rozen’s bed, there was a laptop and on the screen there was a game interface, in addition Rozen hadn’t changed out of his formal wear allowing people to know exactly what state he was in when he fell asleep.

The hateful expression on Rozen’s face immediately vanished and changed into a “Oh shit” face.

Mashu’s eyes were full of a rich blaming look.

“Working and not resting is harmful to the body, if you don’t fully rest what are you going to do if you get sick?”

Mashu then repeated what she had said dozens of times before.

Fou had as if planned to echo what Mashu was saying and broke free of her bosom, jumping onto Mashu’s shoulder while crying out to Rozen.

Although this cry was very cute, in Rozen’s ear it was like kicking a person when he’s down.

At that moment, Fang Li could only whisper, “I can sleep in the day anyway, so I can use the night to play games, what’s the issue?”

This was obviously making excuses.

Rozen raised up both his hands as if to surrender.

People who were familiar with these two would absolutely know that this conversation had been repeated almost daily in the room.

One side was a sloppy and amused youngster.

Another side an earnest and clever young girl.

Such a pair in this Chaldea facility were almost always having this conversation.

Rozen could even guess correctly what this Kouhai was worrying about.

Nothing but wanting to mentioning two people.

The first was related to a significant person for Rozen.

“If you woke up any later I’ll have to go to the doctor to complain.” Mashu said earnestly.

Shortly after, the earnest expression changed to an anxious one, “If the director knew that senpai spent all night playing games she’s definitely going to fly into a rage…”

Mashu looked worried as she said those words.

Since that other person was mentioned Rozen understood.

“The director was the one that made you wake me up?”

Rozen who disliked bothersome things opened his mouth to ask.

Mashu heard Rozen mentioning the Director in such a tone and made a forced smile.

“Yes, we’re supposed to carry out simulated combat today and the director was trying to contact senpai but got no response so she made me go and get you.”

With Mashu saying that, Rozen found that the bracelet on his wrist was shining indicating that someone was trying to contact him.

Looking at this Rozen spoke from his heart.

Mashu expected this and persuaded him saying, “Senpai you better participate otherwise the director will be like last time and make you clean the whole control room.”

Hearing this, Rozen was forced to obey.

“Then we better hurry up and solve this trouble…”

Rozen reluctantly sent out an affirmation and along with the helpless Mashu walked out of the room.

Courtesy images of Mashu and Fou 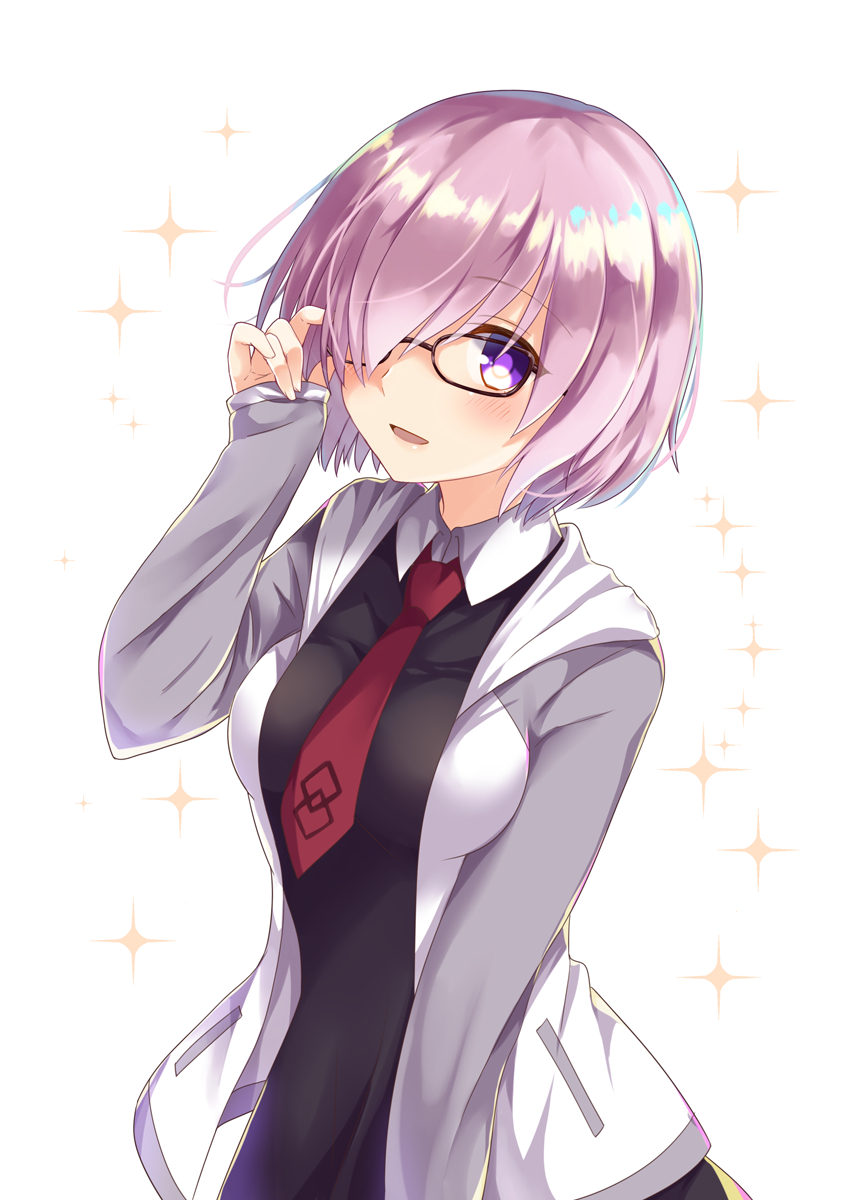 Thanks for doing this chapter!

Thanks for the illustrations!

Thanks for doing this chapter!