The day starts to gradually get dark. The entire Aragane Station has shone the light of flame from the oil lamps, giving the appearance of stars surrounding the earth, this gave the air a somewhat warm feeling.

The silver moon starts to hang in the sky. The cicada sounds calling out in the groves.

Before a crude house, the people inside mutually joke about, giving off a warm atmosphere.

Nobody knows…several hundred meters from Aragane Station on the far-off railroad, a train is travelling extremely fast towards the bound carriageway of Aragane Station.

The train is manufactured from pure steel, looking like a mobile steel fortress, this is the so-called Hayajiro. This full steel Iron Fortress continues onward into a tunnel, speeding away in the Aragane Station’s direction. Above the Aragane Station’s steel city wall, the Samurai responsible for guarding the gate looks through the telescope looking into the direction of the tunnel, he sees the Hayajiro that’s coming at an extremely fast speed.

At that moment, the Samurai directly says.

Hearing this, the surrounding Samurai responded one by one, they looked to the direction of the tunnel.

“That should be the Fusoujou which is set to arrive today?”

After all, the Fusoujou Hayajiro that is slated to arrive today, now arrives on time, this should mean there are no problems right?

This idea is the beginning of the following tragedies.

“Open the city gate! Lower down the hanging bridge!”

Hearing the shouting sound, Aragane Station, one of the final paradises used to protect humans slowly opens the gates of the steel city wall, the hanging bridge is also lowered down gradually, linking up Aragane Station to the railroad.

The Samurais guarding Aragane Station at this moment have not seen.

Above this Fusoujou, shadows crawl about just like spider attachments. Upon closer inspection. In the heart area of these shadows, there is one beating, glowing heart.

It was like this that the Fusoujou fully laden with Kabane fired into Aragane Station.

In Aragane Station’s peripheral zone, there are houses used as warehouses.

At this time, a gate to one of these houses was opened.

Fang Li walked out from the gate, a simple cloth cloak wrapped around his body to resist the cold, with the top somewhat howling in the wind, he quickly moved toward a high place.

Fang Li stands straight on top of a cliff, looking at a direction.

That direction… is precisely Aragane Station’s only gate to the outside.

Looking at that gate, Fang Li has inspected the items in his leg bag first.

Tracing again the dagger in his waist’s sheath, Fang Li mutters. “All is ready, now the remainder is to only wait.”

If he has not guessed wrongly, today is the time that the plot starts.

But now, the packed with Kabane Fusoujou is heading in the Aragane Station direction.

“When that Fusoujou crashes in Aragane Station, this test begins.”

Will the final result be Fang Li smoothly dying under the besieging of the Kabane army?

“Let’s see if my life is going to be great or not!”

Then, Fang Li leaps down, following the steep slope, running in a direction.

Three days in Aragane Station were not lived in vain, Fang Li is not harvestless.

In the three days, Fang Li’s daily work was in the diligent collection of information.

Therefore, Fang Li knew where the Iron Fortress, Hayajiro will escape from.

But, Fang Li is just a Wanderer, if he remains by Yomokawa Ayame’s side, not mentioning Konochi Kurusu, the Yomokawa Family Samurai will definitely not helplessly look on, even suspecting that he has any plan is a possibility.

If the plot development of original works is smooth, Yomokawa Ayame will absolutely arrive there with Konochi Kurusu and a number of Samurais’ protection.

When the time comes, Fang Li plans to converge with Yomokawa Ayame and escape together with the Iron Fortress. Having escaped from Aragane Station, Main Quest 2 will be complete.

Running on the trail of a crowded street, Fang Li’s narrows his eyes slightly.

In the original plot, Yomokawa Ayame smoothly escapes from Aragane Station and has not died in the hand of Kabane. In other words, so long as nothing happens, following the plot, Main Quest 2 almost does not need Fang Li to make a move to be solved.

However, Fang Li does not believe that the Main God’s Envoy Quest will simply be so generous and allow him to easily pocket those Exchange Points.

“If there is an accident…”

That means Main Quest 2 is a failure.

“Hopefully, no accident happens before converging at the Iron Fortress.”

These light words give people a funny feeling.

“I can only meet one’s fate with resignation.”

Leaving behind those few words, Fang Li adjusts his breath and picked up the speed.

When Fang Li will soon crash in the street, an accident comes up in great numbers and from all sides.

Fang Li fiercely turns his head, looking to the source of the noise.

He sees the train covered in iron armour has crazily crashed into the city gate, flinging it aside as if it were a cleaning rag. Bringing with it its fearful size and weight, it crashed on top a house on the left of the street raising a cloud of dust and crushed stone.

In the lookout towers spread all over Aragane Station’s corners, the Golden Bells was sounded one after another, reverberating throughout the entire of Aragane Station.

That is the alarm sound.

When the Kabane invades, the alarm sound informs residents to seek asylum.

Immediately, the entire Aragane Station falls into a flash of deathly stillness.

A few moments later, panic-stricken screams start to resound one after another.

Then starts the rush of people to be the first to escape.

The start of falling to the enemy begins… 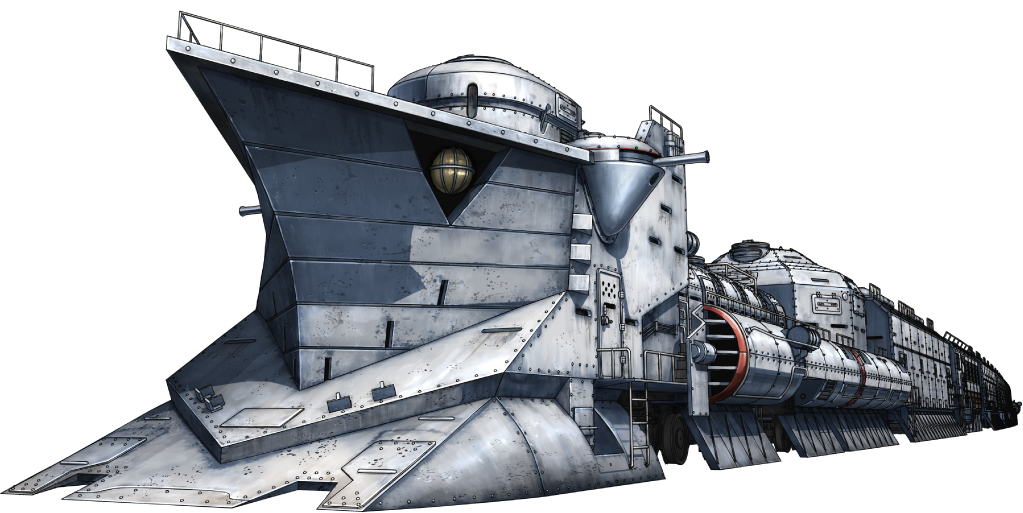 Three in the same day thanks for the treat ? ?

“Therefore, Fang Li where the Iron Fortress, Hayajiro will escape from.”
Fang Li where?? Maybe you mean : Fang Li KNEW where….

Thanks for the fixes!