When the two bullets flew towards Fang Li, he was astonished.

Fang Li hadn’t discovered that person at all. Before this, all the new students even if they were hidden they were known to Fang Li and their flaws are easily seen as well so he knew where they were hiding

However this round, Fang Li hadn’t discovered the hidden person at all. This made him surprised. Naturally, he was just surprised his movements weren’t any slower.

Fang Li used his Moon Blade to deflect all the bullets however as he flicked them away he realised something.

Fang Li raised his head up fiercely and looked up.

There, another surprising thing happened. The second round of bullets not only shot at Fang Li but also the ceiling.

Meanwhile, taking advantage of the bullets deflected by Fang Li both bullets burst with sparks and changed directions. Now both bullets were headed back towards Fang Li aimed at the Moon Blade in his hand.

Fang Li hadn’t expected this at all and couldn’t respond in time to deflect the bullets. Those two bullets shot at the Moon Blade.

The two shots made Fang Li’s fingers numb and he couldn’t help loosening his grip.

When he responded, he tried to grab the falling Moon Blade at an extremely quick speed but before he could a steel cable flew towards him and wrapped his wrist. A formidable strength pulled the other end of the cable and Fang Li’s hand was drawn away just as he was about to brush the Moon Blade.

This made him really shocked.

At this time, at the other end of the cable, a male student was slowly walking while holding the cable in one hand his other had a gun aimed at Fang Li, he had quite an attractive face.

At this time how could Fang Li not know?

This man wasn’t an average person like the students before. At least from his body, Fang Li could feel a constriction when facing other experts.

Not to mention the careful planning the opposite party had made, this had caused him to fall into a trap and instantly made him realize how unusual this person was.

Fang Li was surprised because he had seen this person in the gym and he looked quite familiar. Seeing him now, Fang Li thought he was even more familiar.

Therefore, he looked at the cable wrapped around his wrist and asked, “Who are you?”

Hearing this, the man didn’t reply but gave off a smile with that attractive gigolo like face deliberately saying after, “Your future classmate Mr Superhuman.”

There was only a tense feeling in the air like daggers about to be drawn.

“Superhuman?” Fang Li laughed and said, “I believe someone that can see through other people’s movements then change the path of two rounds of bullets to suddenly shoot at someone else’s movement is also quite superhuman don’t you think?”

“Back at you, I don’t want to say that just anyone can easily deflect bullets.” The man shrugged and said, “Furthermore, compared to being a superhuman I like being called an Emissary of Justice, this name’s quite suitable for me that moves for love.”

“It’s a pity that there aren’t any cute female students here, really a pity.”

The opposite party’s mouth curled up in a smile as he raised the gun towards Fang Li, “If you were a cute female student perhaps I’d show some mercy but since you’re male I can’t do much sorry.”

If any random person who didn’t know the story listened to this they’d think the man was some sort of playboy right?

However, Fang Li didn’t hear any joking in his tone, it was as if he was stating a fact, even if it was a joke what he said wasn’t a lie either.

The man probably really couldn’t attack females for some reason.

But Fang Li was male so he didn’t have to show any mercy.

Regarding this, Fang Li could only smile bitterly.

“Didn’t think there would actually be a new student like you.” Fang Li curled his lips and pondered, “But do you think this is enough to beat me?”

“What do you plan to do?” The man didn’t care at all, “I’ve carefully observed, your body has no other weapons and you only used a dagger from start to finish although according to Butei High rules, students need to have guns and knives so you should also have a gun.

However, you really only seem to be carrying a dagger. You don’t seem to be holding a gun either otherwise I wouldn’t have aimed at the weapon in your hand.

“That’s true I really only have a dagger and no other weapons.” Fang Li’s mouth curled up, “But who said that humans can’t fight without a weapon?”

Hearing this, the man’s face turned serious as his heart gave out warning signs, he leaped instinctually.

At that moment, Fang Li’s foot slammed on the ground and he vanished.

When he appeared again, he was in front of the male student in the air holding the belt of the opposite party.

Similar to a slingshot, Fang Li swung the person in his hand over his head while spinning towards the ground.

Guess who it is 😉 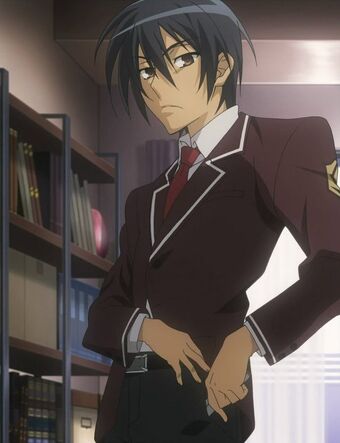 no hes a beater!