Some people would feel insecure while they sleep therefore they generally lock the door and will not sleep in an unfamiliar place. Even if they fall asleep if someone approached them they could also realise that.

Fang Li is such a person.

Therefore, when Fang Li realised that some person was approaching him, his blurry consciousness sobered immediately. Fang Li slowly opened his eyes.

This couldn’t be helped. After all, anyone that just woke up and discovered there was a face in front of him would definitely be frightened.

If this face was unusually cute then the feeling would be even richer. Fang Li opened his eyes and saw that face in front of him which was as fine and cute as a doll’s.

It was so close that Fang Li could even feel the breath coming out from her.

Fang Li suffered an extremely serious scare at that moment.

Who knows when, but Mumei had suddenly gotten in front of Fang Li in a squatting position, she stared at Fang Li’s frightened look and a simple-hearted smiling face gradually appeared.

Her dark red eyes glittered with a strange shine. Her whole body was carrying some sort of slightly evil feeling.

In this situation, Mumei opens her red lips and simply said, “Can you give me some blood?”

Moreover, Fang Li can affirm that anyone else hearing Mumei’s words in this circumstance would have the same feeling as Fang Li. After all, an existence between a human and Kabane said to himself.

Give me some blood.

“You…” Fang Li looked at Mumei, his brow wrinkled slowly.

“I want your blood.” Mumei did not avoid eye contact with Fang Li, looking straight at him with her naive and cute charming little face. She still had the same simple-hearted expression as before, her expressions as natural as can be.

“My belly is hungry, if I don’t drink any I definitely can’t hold on.”

Fang Li didn’t even need to think about what Mumei wanted to drink.

Because… she was hungry.

At this moment, Fang Li suddenly remembered an important matter. As an existence between human and Kabane, if a Kabaneri wants to survive they too need to eat food.

Only, not knowing if the reason lies in them not turning into Kabane completely, what they ate was not human food but rather Kabane food, to be more precise, blood.

If they don’t suck blood in a timely manner, the Kabaneri will lose their human nature and turn into Kabane directly.

Therefore, Mumei said that if she did not drink, she absolutely could not hold on.

Understanding this point, Fang Li’s wrinkled brow receded gradually and he looked at Mumei’s dark red eyes staring at him giving out a sigh.

Blood flowed out from the wound on his wrist.

Looking at the blood coming out from Fang Li’s wrist, Mumei’s eyes could not move from the sight.

The next second, without Fang Li even needing to urge her, Mumei grabbed onto Fang Li’s arm and her exquisite lips sucked onto it.

The sounds of swallowing resounded gently in the cabin.

That was the sound of Mumei drinking Fang Li’s blood.

Also, who knows if it was because Fang Li was too ruthless to himself causing too large of a wound, or if it was because Mumei was enthusiastically sucking up the blood, but the dark red blood was flowing off the corners of her mouth, dripping down.

Fang Li felt Mumei’s soft and tender body sticking close by, her lips on his arm sucking it from his skin. He suddenly felt a faint itching sensation from his skin covering up the pain from the wound.

“This…” Fang Li was speechless.

This girl, should not be intentionally doing that?

Isn’t this tempting him disguisedly?

Didn’t she fear that he wouldn’t be able to endure it and turn into a wolf?

Ok fine, she truly did not need to fear.

After all, if it was just based on strength, ten of Fang Li would still be insufficient to fight with Mumei.

“Ahh bad behaviour…” Fang Li could only endure patiently the feeling that made a person’s heart itch, in his heart he sighed woefully.

Just, regarding a third party, this was not nice to look at.

Therefore, the next moment, a shocked angry sound was heard.

“You… what are you doing?!” The sound’s master was naturally Ikoma.

Who knows when Ikoma woke up, but he saw Mumei holding Fang Li’s hand and sucking blood from it, the expression on his face was shocked and also angry.

Naturally, Ikoma had no idea that similar to Kabane, the Kabaneri did not eat human food but they needed to drink blood to survive.

“What Kabaneri!? It’s just the same as a Kabane! Hurry up and let him go!”

He shouted and directly rushed up.

“S-…” Fang Li was about to say something to stop him quickly.

What a pity, he didn’t have enough time to complete it before Mumei moved first.

Without even turning, Mumei could as if see Ikoma attacking her back, she moved her hand that was similar to an iron hammer and swung backwards suddenly.

With a muffled sound, Ikoma who was rushing up was directly struck in the face by Mumei, his whole body falling heavily onto the ground.

That pitiful condition, caused Fang Li to feel as if the same thing had happened to himself, causing his body to shake, he couldn’t endure looking again.

Mumei stopped and loosened Fang Li’s hand, wiping off the bloodstains on the corners of her mouth, licking the side of her lips to make sure it was fully cleaned.

Looks at Ikoma who was lying down on the ground covering his nose and swaying back and forth, Mumei discontentedly asked: “What are you doing?”

“What am I doing?!?!?” Ikoma covered his painful nose and looked angrily at Mumei. “Should this be what I’m supposed to ask?!”

“What?” Mumei confusedly tilted her head whispering: “This person really is an unfathomable mystery.”

“The unfathomable mystery is you!” Ikoma stared back at Mumei, interrogatively asking her: “Just now, what were you doing?”

“Did you even need to ask?” Mumei unhesitantly gave a reply.

“Naturally I was sucking blood”.

TL Note: If you guys don’t get the reference to the blood sucking bit, basically Mumei is sucking it in a kinda lewd way. Kinda like this but in reverse. 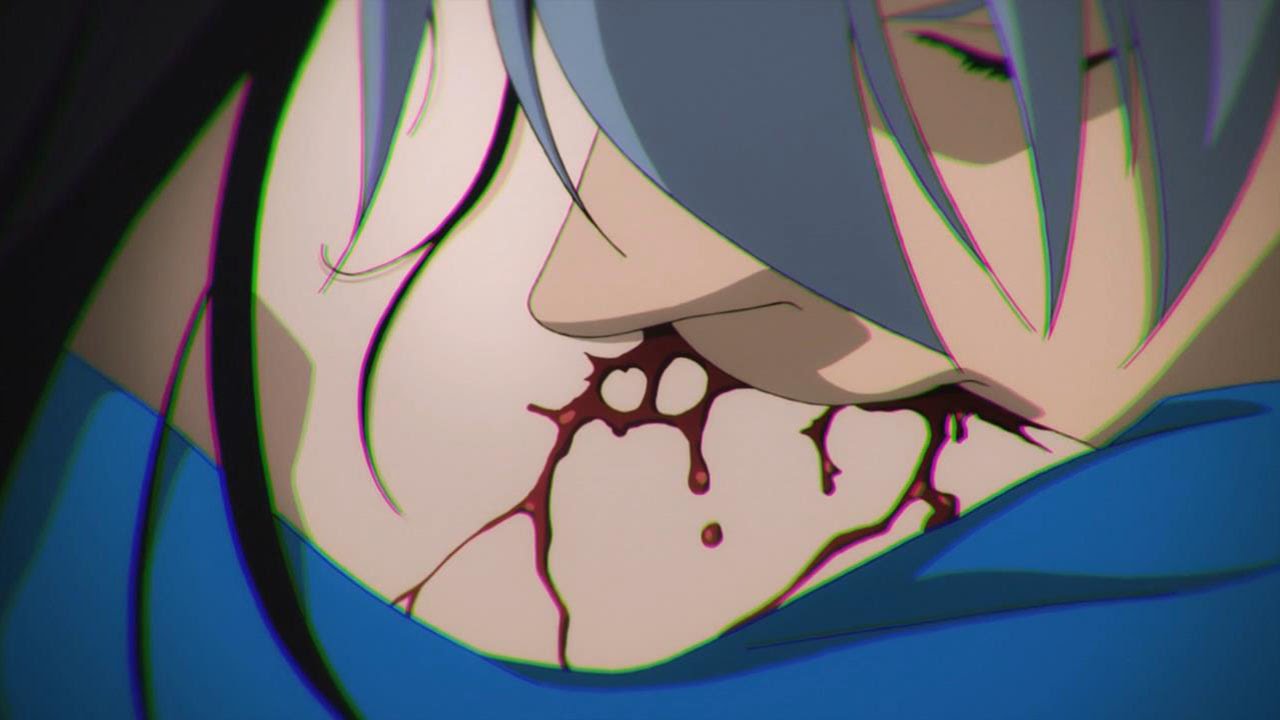