Mumei’s emotions at this moment was much more obvious compared to any other time from before.

One could see, that in the young girl opposite Fang Li’s face there was an emergence of real hostility in it.

This hostility, Fang Li clearly knew where it came from.

If his family member was ridiculed by others, perhaps he would also feel the same as Mumei?

Only, Mumei had no idea that that so called Ani sama she mentioned was merely a wishful thought that she approved of as her family member.

Don’t think even for a second that just because Mumei’s strength was very formidable that she wouldn’t suffer.

Actually, in this era, Mumei was also just a victim.

The people of this time had already been robbed of all hope by these monsters named Kabane.

The people only understood the feeling of fear, dread, alarm and fright when confronted with Kabane. The people of this world could not see any future at all, they could be said as being on their last legs…

Just taking a look at these samurai from Aragane station and one could understand the situation.

Even these honored samurais could only respond with fear towards the Kabane.

This couldn’t solely be described by being spiritless.

One must understand that in such an era where a feeling of fear permeates every surrounding, order in a human society couldn’t be counted upon.

Who cares if there were any laws?

So long as you reveleaed even a faint trace of being bitten by a Kabane or transforming into one, then everyone has a reasont to kill you.

For example for existences like Mumei and Ikoma, even if they wore out their mouths to tell people they were harmless, who would trust them?

Who weould want a person next to them to suddenly jump at them and bite them, slurping up all their blood and therefore killing them?

Therefore, the truly fearful part was not the Kabane but rather the feelings hidden deep within the people.

MumeI and the people she knew were sacrificial victims of this fear.

The relay station that Mumei lived in when she was human was the same as Aragane station, it was attacked and occupied by the Kabane and fell to the enemy.

At that time, the samurai at Mumei’s relay station suspected them of being bitten by a Kabane therefore they shot them with their guns. Because Mumei was protected by her mother, she ended up living…

However, her mother actually died under the samurai’s steam gun.

But when Mumei too was about to get shot as well, the person who saved this young girl was exactly that so called Ani sama that she mentioned.

A person with a deep background, moreover one that was extremely shrewd, fierce and ambitious.

He, was the one that saved this young girl from the hoodlums.

He, erased the young girl’s name, then gave this young girl without a name, the name of Mumei.

He, to achieve his goal, was gathering up manpower, and even experimenting and studying the Kabane’s biology and characteristics.

He, made Mumei perform the surgery voluntarily, and injected her with the Kabane virus, turning her into a Kabaneri.

The result of Mumei turning into a Kabaneri was merely a result of an experiment.

This so called Ani sama in her mouth also taught Mumei since childhood in the art of fighting, to become a weapon specifically meant to fight Kabane.

It can be said that Mumei was just the sharp claws that that Ani sama had trained.

Sharp claws that were meant to tear apart and fight with the Kabane.

Therefore, Mumei was so stubborn about being able to fight with the Kabane.

This, for Mumei was her only reason for living.

Regarding this young girl who was at the brink of a hopeless situation, this was her only straw to grab…

Therefore, Mumei respected this person, and calls him Ani sama.

“Is this the so called truth is often the most brutal?”

Fang Li raised his eyes and looked straight at Mumei asking her, “How old are you?”

This sudden question caused Mumei to suddenly be lost for words.

Why would someone ask something like that from the previous serious topic?

With that in mind, Mumei subconsciously replied, “12 years old..”

Her height was probably not over 160cm.

Her build was also the petite type.

On her charming face you could still see a trace of naiveness.

However based on her stature, Mumei could actually be compared with 15 or 16 year old girls…

“This sort of stature at only 12 years old would probably make the elementary students on Earth depressed?”

But if this truly was her age then it was understandable why Mumei was very simple hearted in her actions, doing whatever she wanted and doing it her own way beyond fighting.

To put it nicely, Mumei was just a bear child.

“To expect a bear child like this to see through the true colours of an adult is indeed too hard”, Fang Li sighed and couldn’t help but say, “To not know anything, perhaps that’s better for you”

Therefore, Mumei fished out a sharp weapon from her bosom.

This was a type of kunai.

Mumei spun the kunai and dextrously threw it from her hand.

That sharp kunai turned into an arrow under her throw and cut through the air, causing a sharp splitting sound which violently shot towards Fang Li.

The speed of that shot could be compared to a bullet…

If it was before Fang Li had obtained his title, he definitely wouldn’t be able to respond fast enough to catch the Kunai’s path.

However, at this moment, Fang Li smoothly captured the kunai that was coming at him in his eyes.

Only, Fang Li did not actually avoid it, still staying in the same spot and not moving even a tiny bit.

The sharp then pierced behind Fang Li and nailed itself on the wall close by.

Obviously, Fang Li could already see clearly that that sharp weapon wasn’t really aimed at him.

But opposite him, Mumei still maintained her posture of throwing the kunai, staring at Fang Li for a bit before making a sound, “I hate you…”

Leaving behind these words, Mumei turned around and went out of the cavern, leaping up on to a tree and just like a lithe animal she leaped forward and gradually disappeared from Fang Li’s vision.

Seeing that Fang Li could only helplessly smile, grabbing the kunai on the wall and pulling it out.

Feeling the remains of warmth from the young girl’s body on the kunai, Fang Li thought out loud, “Was I going too far?”

After all in this scenario Mumei was only a victim.

She was a little silly, a little naive, but she absolutely was not villain.

Naturally, Mumei herself was no villain, but that didn’t mean there weren’t any on her side…

For example, that so called Ani sama. 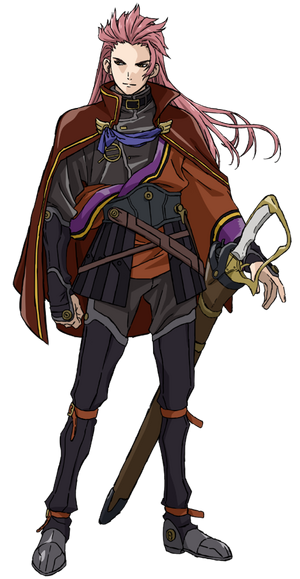