The sudden strange name that was mentioned startled Fang Li.

Seeing his startled appearance, Rindou Amamiya shrugged and said, “I know that you youngsters aren’t familiar with that name, how about Venus, do you know that?”

“I know that.” Fang Li replied and said, “The goddess of beauty from Greece?”

“Not bad.” Rindou Amamiya was astonished saying, “Didn’t think that anyone would remember something from 50 years ago, unexpectedly there’re still people who know about it.”

Hearing this, Fang Li closed his mouth. He almost forgot that the current time here was dozens of years in the future, too much talking made him make a mistake.

“Aphrodite is Venus.” Rindou Amamiya said to the silent Fang Li continuing, “In the lore of Ancient Greek Mythology, she was called the goddess of love, in Roman Mythology she was also honoured as a beautiful goddess of love with many famous legends.”

“What about it?” Fang Li directly asked, “It can’t be that you’re saying all this to me for nothing?”

Rindou Amamiya didn’t reply but took out a touchscreen control panel from his bosom, after playing with it for a bit he handed it to Fang Li.

Fang Li received it and looked at the screen of the panel.

There was an image on it. An Aragami’s image. It had a huge body that was enamel white. Its body was covered in armour that looked like lotus leaves. Like a plant, the bottom part of it was a flower while the upper part was a human body. The lower half looked like a lotus flower the upper human body looked like a young girl.

This Aragami that looked like a half-person half-plant hybrid was floating on the sea. There were no arms on it and its lower body had innumerable tentacles extended.

This Aragami’s size was also quite incomparable, it was the size of a common building, maybe even bigger.

“This is an Aragami that we know on Earth as one of the most fearful Aragami.” Rindou Amamiya opened his mouth and said, “Fenrir lists this as a Deusphage Species, an ultra-large type, many living things in the sea were eaten by it, not only does it have formidable power but it can also release a type of pheromone that can attract Aragami and direct them to some extent.”

“So that’s it.” Fang Li looked back at the panel and focusing on the huge Aragami opened his mouth to say, “So that’s Aphrodite?”

Aphrodite or Venus, is an existence with a perfect female body and appearance, symbolising love and beauty it’s considered the pinnacle of beauty, grace and charm.

That type of existence could definitely attract any sort of race. Since this Aragami could release a pheromone capable of controlling Aragami, it could also achieve the same effect. In addition, the young beautiful girl on top made it quite similar to the Goddess of Beauty mentioned in Ancient Greece.

But the reason why Rindou Amamiya suddenly mentioned this Aragami could be guessed by Fang Li.

“This is it?” Fang Li said assuredly, “The Aragami leading the Aragami army to attack the Russian Branch is this Aphrodite?”

If one thought carefully they’d be able to understand. Although the Aragami attacking in groups was not strange, attacking in an orderly manner including even having an initial probing attack. Furthermore, the huge size of the attack as well as the focused destination made it suspicious.

But if it was Aphrodite that was manipulating the Aragami army then it wasn’t a strange scenario.

After all, this Aragami was capable of attracting other Aragami and controlling them to some extent allowing it to gather massive amounts of Aragami and attack.

While Fang Li was thinking, Rindou Amamiya nodded in approval.

“Hibari has reported the condition here to the Far East Branch, the above has given us this guess, that this matter has a huge relation with Aphrodite.”

While saying so, Rindou Amamiya extended his hand and touching the screen, slide across several panels and changed the screen to another image. In this image, a clear picture of Aphrodite entering from the sea is shown.

“This image was from some time ago that confirmed it, that Aphrodite has entered from the sea.” Rindou Amamiya said, “Also this ultra-large Deusphage’s entry location is Russia.”

With that being the case, the truth was simple to guess. Naturally, this was just the surface level. Fang Li held the screen and looked pensively at the huge Aragami, throwing it back to Rindou Amamiya after a while and asked frankly, “What do you want me to do?”

Fang Li didn’t believe that Rindou Amamiya would just mysteriously want to tell him all this information. Since Rindou Amamiya came here specifically and told him such important information, he definitely had a goal.

Rindou Amamiya didn’t deny this and said, “This sort of Deusphage Aragami exists around the world, such as Amaterasu, Tsukuyomi and Susanoo in the Far East along with Zeus, Hera and Ouroboros, Aphrodite was known long ago but it had never moved from the sea and never gone on land. Furthermore, it entered into Russia and gathered all these Aragami to attack the Russian Branch, don’t you think there’s an issue here?”

“Perhaps there is an issue but this isn’t an issue that I need to solve?” Fang Li spread out his hands and said to him, “Good, don’t beat around the bush and tell me what you really want me to do.”

“A task.” Rindou Amamiya touched the screen and threw it back to Fang Li again saying, “Investigate why Aphrodite entered Russia and gathered an army to attack, this is a task from the Far East Branch and I recommended you to complete it, if you want to get a promotion and be rich then we’ll see how you go.”

At the same moment Rindou Amamiya spoke, a System Notification sounded out.

“Serial Number 11273 has triggered an A Rank side quest: Investigate the Russian Branch.”

“Quest Details: Investigate the reason why the Deusphage AragamiAphroditee entered Russia and report back to Rindou Amamiya.” 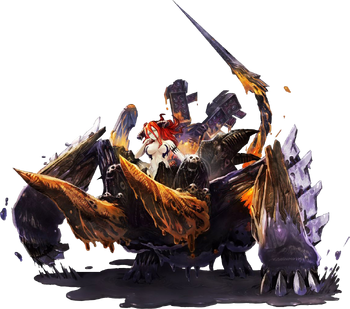 I’m guessing by mc ceaselessness, it is a video game exclusive not in anime
Thanks for the chapter

Actually it’s from Anime, but 1 year before the plot start

Venus is Roman not Greek sheesh